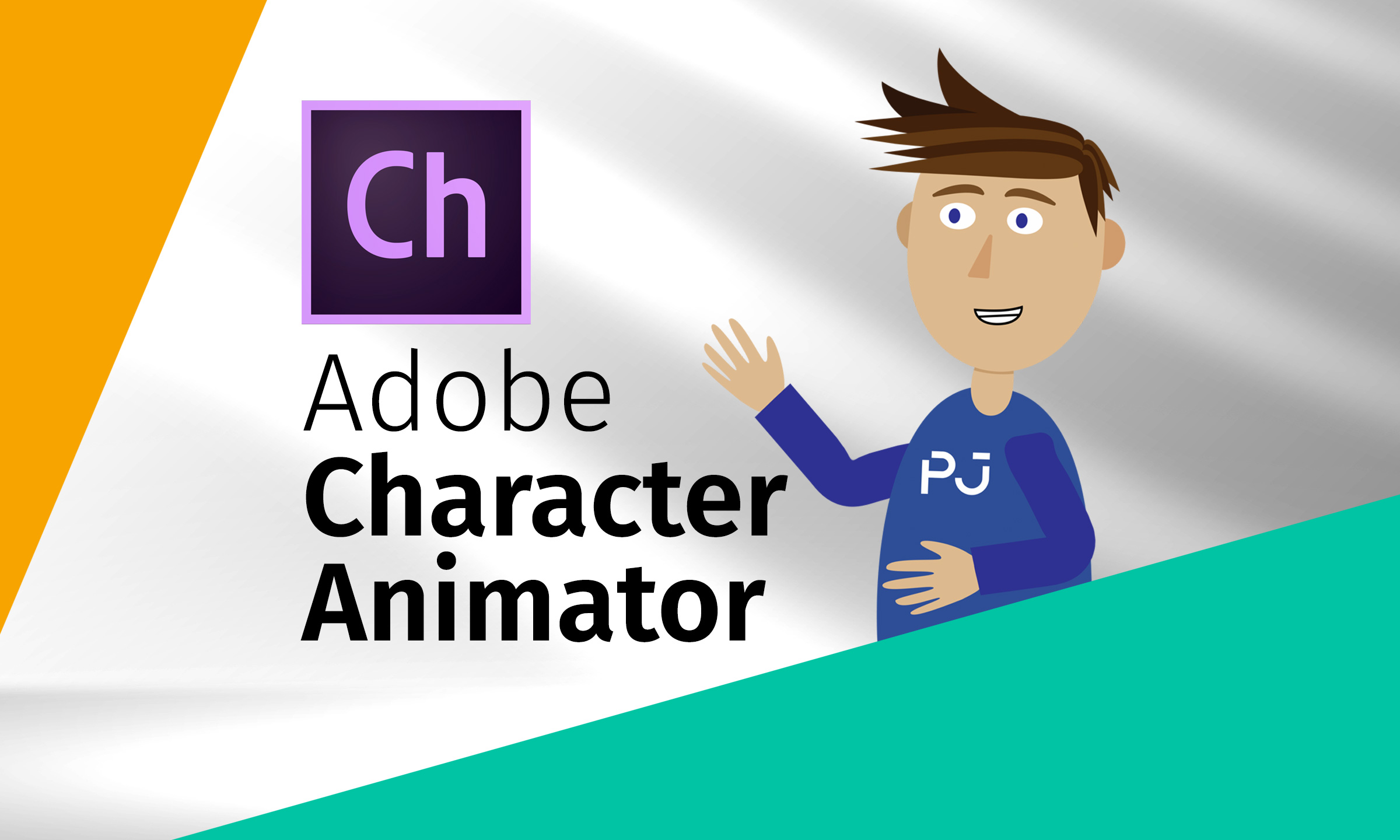 Have you ever thought about making your own cartoons, but didn’t know where to begin?

Create a character and animate it with your own performance.  Make animations for your own cartoons, explainer videos, or an animated series.  When you smile… nod your head… raise your eyebrows… your character does too!

And it’s so fast and responsive, you can even stream your animations live.

Bring your artwork to life with Character Animator. 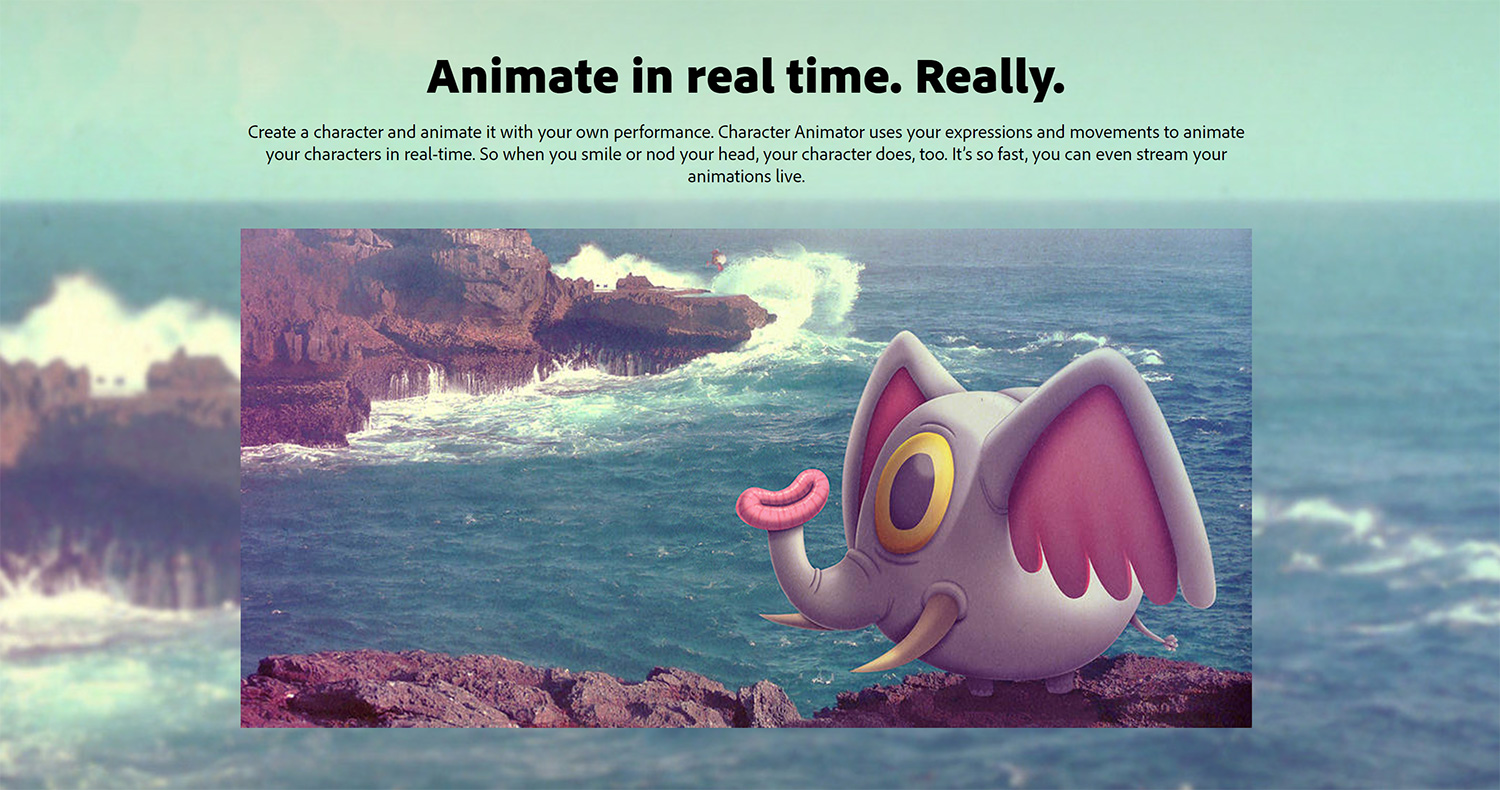 Getting Started with Adobe Character Animator

Just getting started with Character Animator?

There’s a lot to cover here, so we made this quick-jump section for your convenience.

Jump to a Section:

What is Adobe Character Animator CC?

Adobe Character Animator is a desktop animation program that allows you to use your computers webcam as an input device that mimics your own expressions and movements to animate your characters in real-time.

Character Animator is not available as a standalone program or single app subscription.  It’s included in the Adobe Creative Cloud suite.

This is because the software relies heavily on Adobe’s Dynamic Link between other Creative Cloud applications such as Photoshop and Illustrator.

Get Character Animator as part of Adobe Creative Cloud for just $52.99/mo.

One thing I really love about this program is everything that comes bundled with it.

Since character animation is new to most people, Adobe provides a number of free character (a.k.a. puppet) templates with the program.

Use these free puppet files in your own creations, or break them down to see how they were put together.

What is a puppet?

This is super helpful in a few ways.

Think about it.  For starters, it gives you a chance to quickly start playing around with how the program works (even if you have zero design experience).  Additionally, it gives you ready-made templates to use as the basis to build your own characters from.

You can find these free puppet templates on the Start tab inside the program. 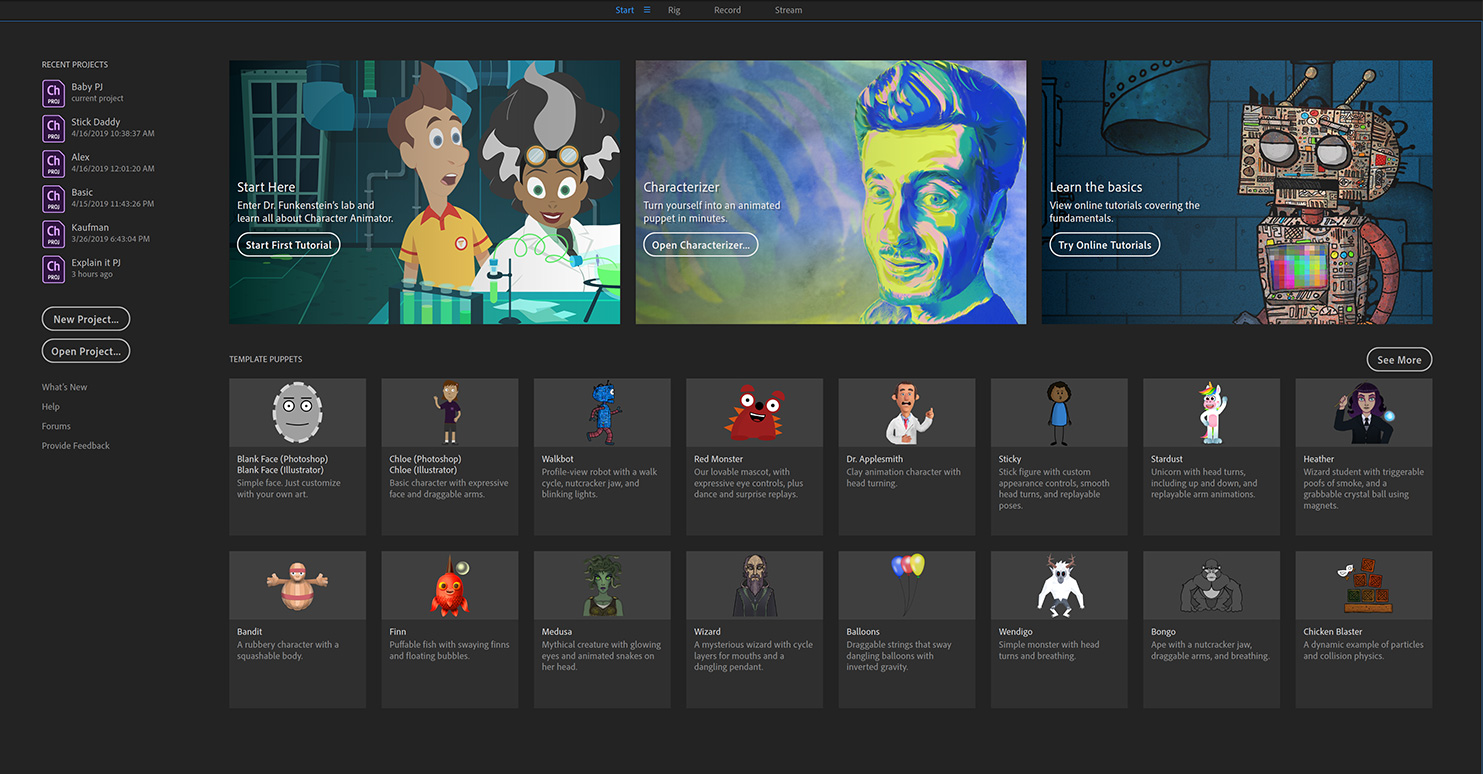 But wait, there’s more where that came from! 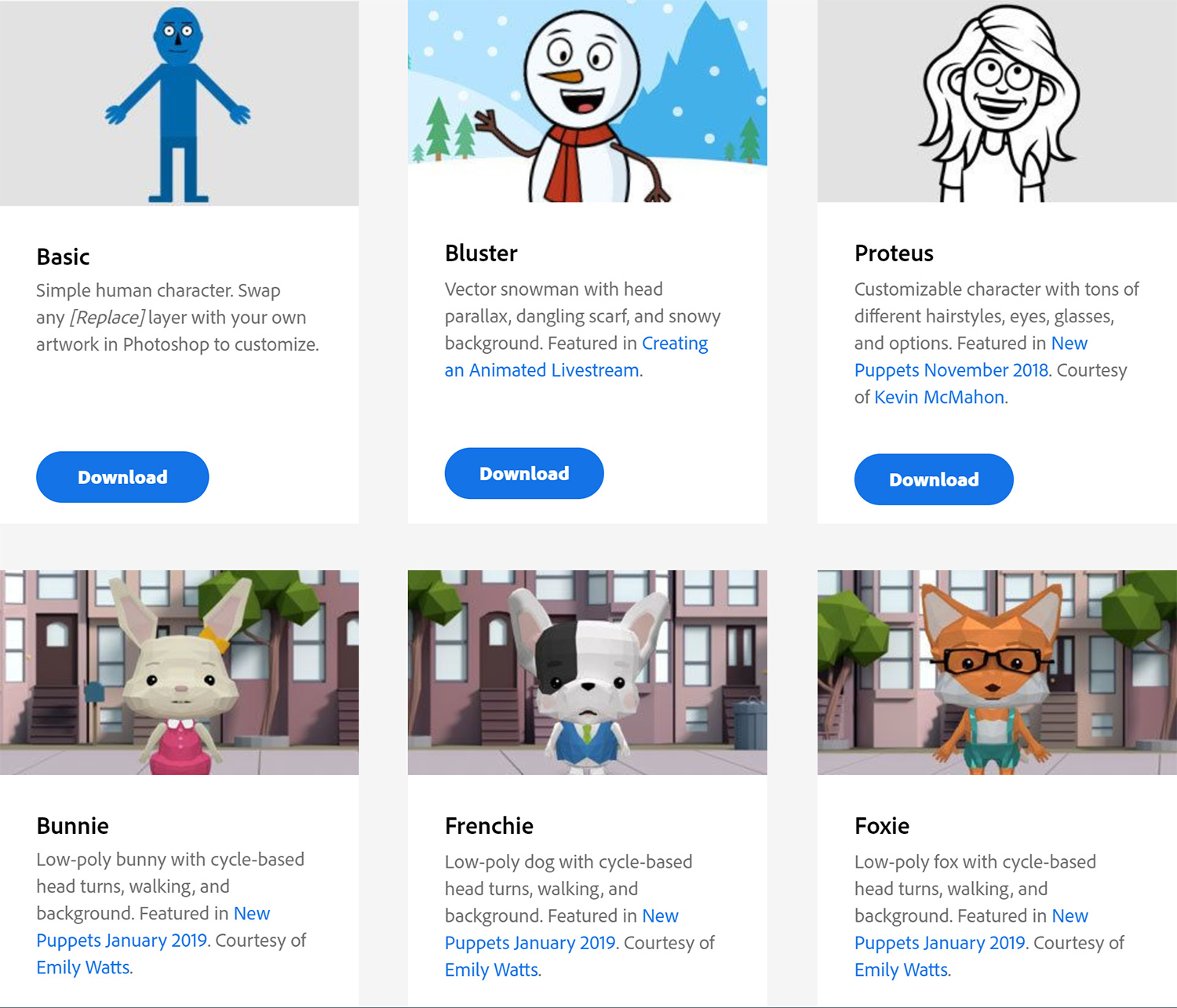 Another Cool Thing to Note about .puppet Files

Once you bring your artwork into Character Animator, and rig it for animation… you can save it as a .puppet file. This file can then be shared with others.

What this means is that ready-to-use, rigged .puppet files are starting to become available for download/purchase – similar to graphic templates.  We found some really stylish ones at GraphicMama, who also offer custom characters designed specifically for Character Animator. 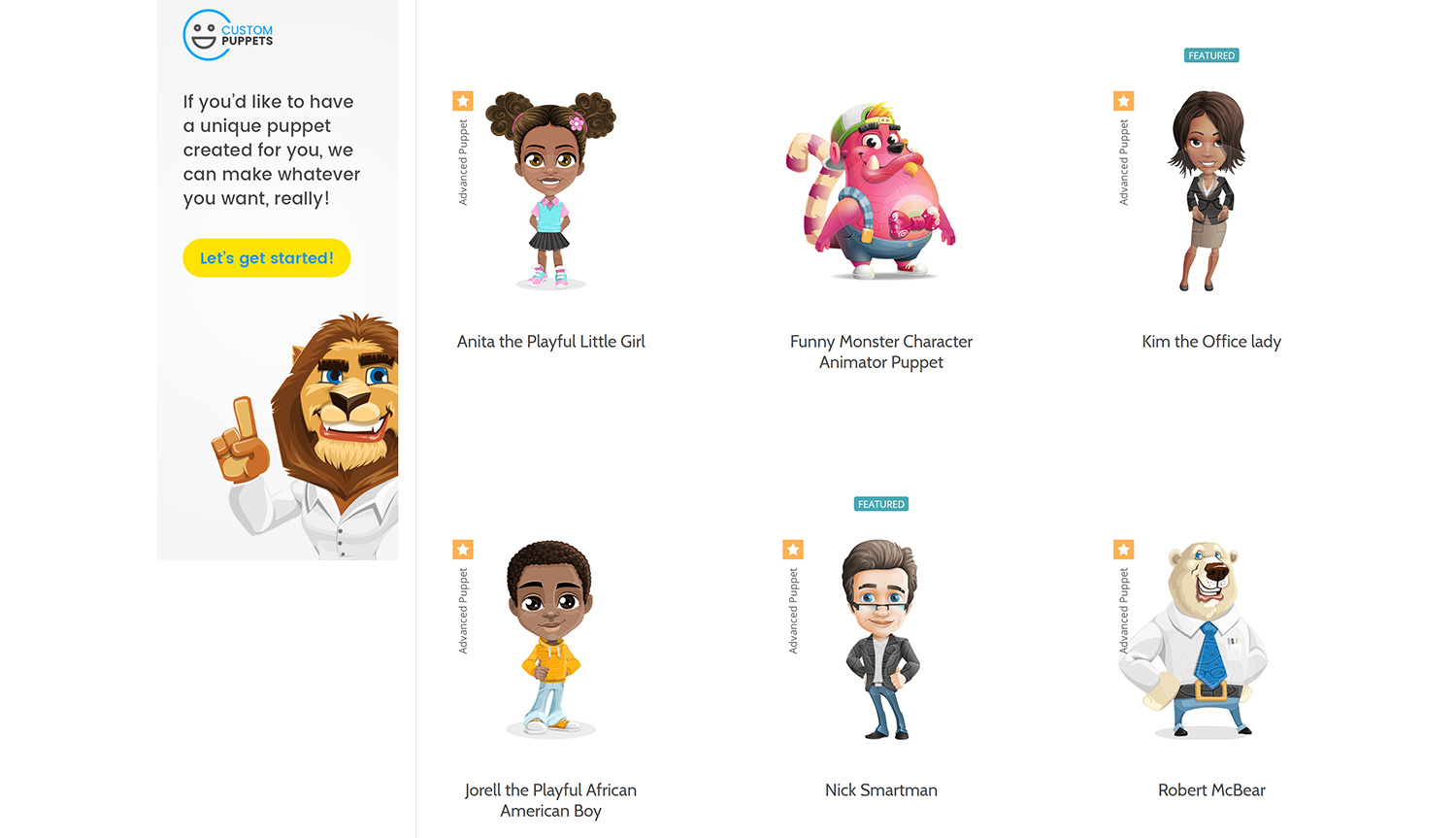 Image Source: GraphicMama.com
Back to Top

How To Use Character Animator CC?

Woo-hoo!  Let’s get to animating.

There are a number of ways to get started creating in Character Animator.

If you’re completely new to the software, and just want to play to see what you think… open the program and click on the Start tab at the top.  As we noted above, Character Animator comes pre-loaded with an assortment of free puppet templates that are rigged and ready to be animated.

However, if you’re ready to animate your own artwork… we’d highly suggest following the tutorials by Dave Werner of Okay Samurai.

For your convenience, we’ve compiled some of his best Character Animator tutorials for beginners below.

Additionally, you can find a ton of useful information in the Adobe Character Animator’s User Guide, such as how to:

Let us know in the comments below, and we’ll add it to this article.

The program is at it’s best when working with fully rigged characters (a.k.a. puppets) originally built in Adobe Photoshop or Illustrator…

However, there are new features, such as Characterizer, which make the software useful without needing Photoshop or Illustrator.

Create a stylized character in minutes.

Use the new Characterizer, powered by Adobe Sensei AI technology, to turn any piece of art into an animated character using your webcam.

Or build new characters by modifying the built-in character puppet templates that come included with the software.

Bring characters to life using your own performance!

Adobe Character Animator CC uses your computer’s webcam and microphone as input devices – syncing lips to your voice, and tracking your eye movements and facial features to animate your character in real time.

When importing a character design built in Photoshop or Illustrator, you’re able to fully take advantage of the Character Animator by using features such as:

In other words:  this program is just plain fun to play around with.

Character Animator is always getting better with new features rolling out regularly, and with your Creative Cloud membership… you get new features as soon as they’re released.

Even though the program is relatively new, there are already loads of amazing tutorials and walk-throughs that will help you get started with creating your own character animations.

We’ve compiled some of the best Adobe Character Animator tutorials for you to get started.

And remember, the puppets in the following tutorials either come installed with Character Animator, or are available for free here.

This is a simple beginner-level walkthrough Character Animator CC (2020 Update) by Dave Werner of Okay Samurai.  After going through this tutorial, you should be able to create an animated character with:

Triggers are a critical part of any puppet made in Character Animator… allowing you to add emotions, props, and animated sequences on demand.  In this tutorial, Dave Werner of Okay Samurai walks us through the fundamentals of setting up and using triggers.

Adding physics is a great way to easily add motion and life into your characters and scenes. In this 3 part tutorial, Dave covers the following fundamentals of physics in Character Animator CC:

The Walk behavior in Adobe Character Animator CC lets you quickly rig a character for movement across a scene. In this in-depth tutorial, Dave shows you how to rig your character and add tagged handles (like shoulders and knees), plus how to adjust the parameters to make a custom walk style.

In this longform Adobe Character Animator tutorial, Dave Werner of Okay Samurai takes us behind the scenes and shows us how he created his “Game Subscriptions Are The Future” explainer-style animation video using Character Animator.

Dave goes deep into every stage of the creative process:

Character Animator CC had a major update in November 2019, and boasts a ton of new features!

Let’s take a look at a few of them:

Cameras let you add different types of shots into your scene.  This tutorial by Dave Werner of Okay Samurai walks you through a sample scene and teaches you the basics of setting up camera systems for both recorded, and live performances.

Arguably the most exciting update to Adobe Character Animator CC, is the ability to use keyframes.  Keyframes allow more control over specific parameters such as position, scale, rotation, and more.  This tutorial covers the basics, showing you how to set up and edit a set of simple keyframes, and finally showing you an example of keyframed replays and triggers added to a new Character Animator puppet called Schizzler the alien.

Remember, all the puppets in these tutorials are available for free at Adobe Character Animator.

Simply put, this lets you play an audio file at the same time as a triggered animation, such as a sound effect, voice, or song. In this tutorial, Dave from Okay Samurai takes us through the basics of adding audio to the Chloe puppet, and then shows a more advanced example featuring Drumbot.

I know the feeling…

You’re in luck, check out this link to even more great Character Animator tutorials for beginners.

Personally, I think this program is a game changer.

Character Animator takes the previously time consuming and tedious task of 2D animation… simplifies it, streamlines it, and makes it fun all at the same time.

Being part of the Adobe Creative Cloud suite of apps is probably Character Animator’s biggest plus.

Now, anybody with a subscription to Creative Cloud who has a working knowledge of Photoshop or Illustrator can be well on their way to making their own animated cartoon series.

In fact, I’ll use myself as an example:

A week ago, I was completely new to character animation.  I’d never done it before – never even thought about it, actually.  I assumed it was something I couldn’t do.  However, I’m proficient in Adobe Photoshop, Illustrator, After Effects, Premiere Pro, and Audition…

I followed Okay Samurai’s Complete Animation Workflow tutorial above, and created my own explainer-style animation video example within 2 days.  Have a look at it here:

Get Character Animator as part of Adobe Creative Cloud for just $52.99/mo.

Have you had a chance to check out Adobe Character Animator? What do you think?

What other programs do you use to animate your characters, and what makes them different than Character Animator?

Joel Simser is a creative writer, entrepreneur, and all around video maestro. He’s produced original music for commercials and television, lent his voice to various promos and presentations, and edited thousands of non-award winning videos (including a few actual award shows).

As founder of AwesomeContentCreator.com, he authors in-depth guides that teach fellow content creators ways to grow and develop in their industries. 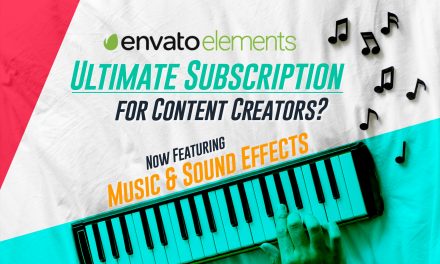 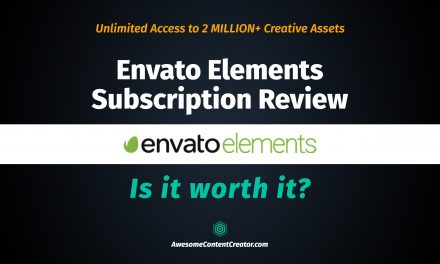 Animation Composer Review | The Most Handy After Effects Plugin 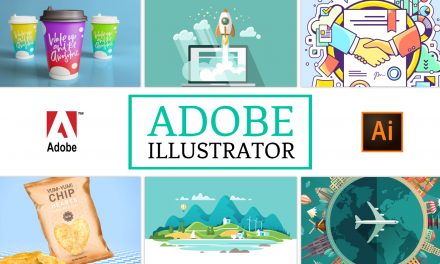 When To Use Adobe Photoshop vs Illustrator vs InDesign 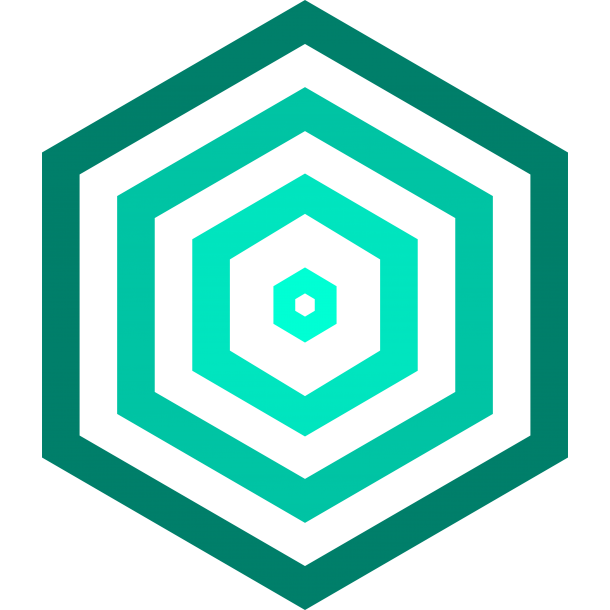 Want to be part of something awesome? Subscribe to receive the best tips, tools, and resources for content creators!

You have Successfully Subscribed!

We hate SPAM and promise to keep your email address safe.